What is a Steam Trap? 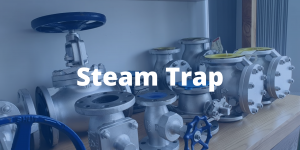 What is a Steam Trap?

The steam created will condensate back into the water during the heating process after releasing its energy. To maximise the heat energy transfer and ensure the system’s safety, the water (condensates) must be removed. Removing condensates without any loss of live steam is the prime function of steam traps. Additionally, steam traps also discharge air that is present in the system before the system start-up to ensure a safer process.

Why do we need Steam Trap?

As mentioned, the steam created within the boiler will condense into the water and clog the pipelines. Thus causing a large amount of heat loss within the system. Therefore, the purpose of a steam trap is to allow condensate and air to be discharged from the steam system while preventing the loss of live steam. This type of valve opens when condensate and air are present and closes when steam tries to pass. Hence ‘trapping’ the moisture!

What are the uses of Steam traps?

There are two general types of applications for steam traps: drip Application and Process Application.

Types of Steam Traps and their functions:

Thermodynamic steam traps have a unique operating principle that relies on the dynamics of water and flashes steam. They are simple, robust, reliable, and can operate at high temperatures and pressures. Their construction, use and benefits are detailed on this page. Additionally, these steam traps are highly robust and easy to use. As the flash steam passes through the web (as shown above), the flat-sealing face door will be pushed back, and the cool condensate, along with some air, will be discharged from the inner ring under the disc and out through the three peripheral outlets. Then the hot condensate will flow from the inlet into the chamber under the disc and drop in pressure. Thus releasing flash steam at a high velocity creates a low-pressure area under the disc which draws it towards the seat. Simultaneously, the flash steam’s pressure build-up inside the chamber and force the disc down against the incoming condensate until it sits on the inner and outer rings. During this, the steam is trapped in the upper chamber, and the pressure above the disc equals the pressure under the disc. Eventually, the trapped pressure in the upper chamber falls as the flash steam condenses. The higher condensate pressure raises the disc, and the cycle repeats.

In a Float Steam Trap, the float’s position is directly affected by the degree of condensation in the trap. Feedback reacts to condensate flow and opening and closing valves to compensate for compliance.

In the design of the damper air brake system, a headlight is attached to a damper control valve. The float floats and moves the lever when water flows into the trap, causing the valve to open. However, due to the limited movement of the arm, the valve head is often in the condensate flow path, which can result in an additional pull acting to close the valve in high flow conditions. 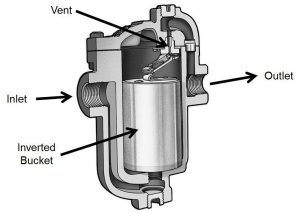 In an inverted bucket steam trap, the bucket inside the web is attached to a lever that opens and closes the trap valve according to the movement of the bucket. When steam or air flows into the bottom of the inverted bucket and condensate surrounds it on the outside, the moisture causes the bucket to float and rise. In this position, the bucket will cause the trap valve to close. A vent on the top of the bucket allows a small amount of steam to be released on top of the trap, where it is discharged downstream. As steam escapes through the vent, condensate begins to fill the inside of the barrel, causing it to sink and allowing the lever to open the trap valve and release the condensate (along with any steam trapped in the trap).

For more information regarding steam traps, please get in touch with us at: